Our elves are busy at the Thunderbird Atlatl shop. We are working closely with delivery services to make sure orders go out in time for delivery by Christmas. We usually use priority mail because our post office is just down the street and delivery is pretty quick. We also can ship via UPS/Fed Ex/DHL if that works better for you.

The post office says the last day to ship priority mail for delivery by Christmas is Saturday, December 21. If you want to guarantee delivery, we can ship via Priority Mail Express. There is an extra charge but delivery is guaranteed.

Worried about delivery and not sure what to get for a gift, you can order a gift certificate. We can send the gift certificate in regular mail or deliver it via email. An atlatl kit also makes a nice gift and is a great holiday project.

Feel free to call us at 1-800-836-4520 or 607-659-3854 Leave a message if we don’t answer (we might be at the post office!) or try our cell phone number which is available on our answering machine. You can also send us an email at contact@thunderbirdatlatl.com and we will get back to you as quickly as possible. 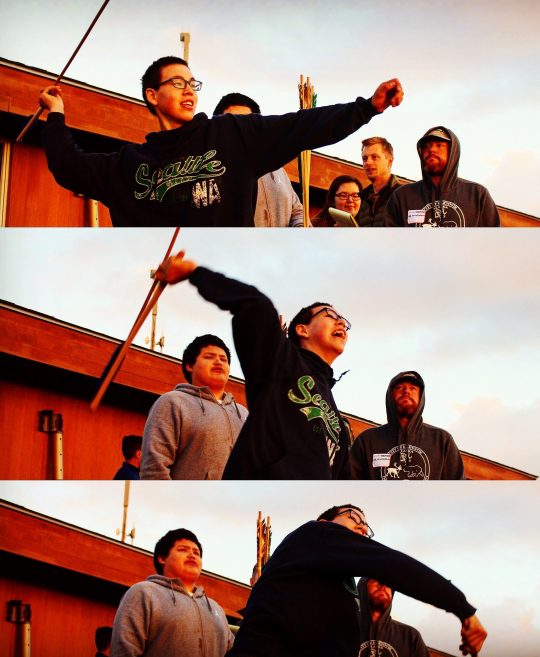 An atlatl fragment has recently surfaced that was discovered in the Ozarks in Missouri, as reported by Western Digs.

New analysis of two spear-throwers excavated nearly a century ago in the Ozark Mountains reveals what one archaeologist calls an â€œuncannyâ€ similarity to those used in the ancient Southwest and Mesoamerica.

One of the artifacts â€” an intact carved wooden spear thrower, or atlatl â€” was first described in the 1920s, when it was found under a rock outcrop known as the Alred Shelter in northwestern Arkansas.
Montgomery Atlatl

I have postulated that the fragment is only about two thirds of the original spear thrower.

The atlatl fragment is only twelve and a half inches long. I believe that the distal portion broke off and was lost. I compared the fragment to several atlatls that I have made and came to the conclusion that the missing end would have looked like what I have depicted in the second picture.

I believe that the slit in the spear thrower would have been used to tie on an atlatl weight, as shown.

I did not depict the loops that would have been attached at the proximal end but it is evident that some kind of finger loop system would have been used on this spear thrower. The finger loops may have been made of leather, plant fiber, bone, shell or hair.

What do you think?