It’s leap year and soon it will be spring! Take the extra day and the approach of spring to build your own atlatl and dart set. Thunderbird Atlatl has a variety of kits to choose from. In a few hours, you will have an atlatl and dart set made with your own hands. Check out our instructional videos on You Tube. 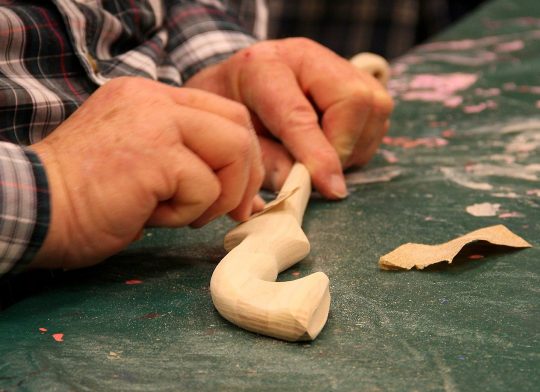 The photos from a workshop using Thunderbird Atlatl kits. The workshop took place at Mounds State Park in Anderson, Indiana. Interpretive Naturalist Kelley Morgan led the program. Thanks to Kelley for providing the photos. 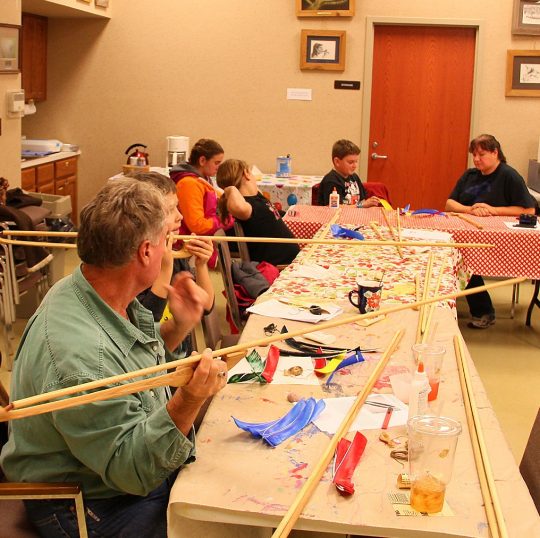 And now for something completely different!

Bob Berg demonstrates how to make a simple tent (with a door and a floor) with just one tarp, one piece of rope, one pole, and four stakes. Total cost: About $15. Total time: 5-10 minutes. Save time and money the next time you go camping!

What’s the purpose of an atlatl weight? Here’s a video of Bob Berg discussing his theory on why atlatl weights (boat stones) are a counterbalance for heavy darts. Bob doesn’t believe that weights are for adding more “power” or “speed” to your atlatl throw, as many have theorized, but actually to make holding a loaded dart more comfortable and balanced while hunting. Bob also explains why bannerstones are not atlatl weights. 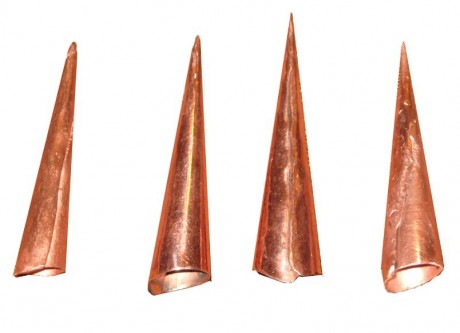 The conical copper points that are found in the Great Lakes area of the United States were originally produced by people from The Old Copper Culture. The copper â€œcultureâ€ began as early as 7000 years ago by some estimates so it is likely to have embraced many cultures over dozens of centuries. The conical copper point was used for the entire time so it must have been a very successful design. Not only are they a good design but the color of the copper is beautiful.

I have experimented with natural copper nuggets several times but it is rare and expensive to get so I use modern copper sheets to produce the conical copper points I make. The thickness of the copper I start with is usually 1/16â€ or thicker. I start by cutting triangles of copper with a tin snip that are about 2 Â½â€ long by the diameter of the dart times three and one half. The next step is to hammer the three edges so they taper down to almost paper thinness. The reason for this is that in forming the cone the two sides need to overlap. I use a ball peen hammer and an anvil. In addition to these tools I use a mandrill and a wooden block with a half cone shape carved out that matches the mandrill shape.

Okay atlatlists, spring is just around the corner! It’s time to get that equipment out and get ready to go to some atlatl events or just have some fun on your own!

Check your darts and get them ready. You can easily “fluff” out the feathers on your darts by holding them over a steaming kettle of water. It’s amazing how this simple procedure will put new life into your dart fletchings! Hold the dart over the steam and gently preen the feathers into shape.

Straightening your wood darts you have purchased from Thunderbird Atlatl, can be accomplished by gently bending the dart in the direction you wish to straighten it. For a more permanent fix or for a stubborn bend, apply heat to the dart with a flame such as a propane torch or kitchen range making it easier to bend the dart in the direction you want. After it cools the dart “sets” and will usually remain straight. If you have any questions, just give us a call at 800-836-4520 and we will be happy to help you!

Here are a few photos of Bob Berg’s workshop in Micanopy, Florida with the Florida Outdoors Ministry program. Thanks to Frank Williams for hosting.