Thunderbird Atlatl will be displaying and demonstrating atlatls on Saturday at Sportsman’s Day in Spencer, NY. The event is hosted by the Spencer-Van Etten Sportsman’s Club from 10 a.m. to 5 p.m. at the Spencer Van Etten High School on Darts Crossroad in Spencer.

There will be a variety of displays and demonstrations throughout the day. Some of the day’s activities are listed below:

*the Roosevelt Lucky Buck (the largest buck ever taken in NY) will be the guest of honor.

*Cornell’s “Birds of Prey” will be swooping in from 1 till 2PM in the
auditorium.

*Cornell’s Director of Deer Research Jay Boulanger PHD, along with
Director of Operations at Arnot Forest Gary Goff will be on hand at the
Cornell booth and from 2:30 till 3:30 in the auditorium to talk about
how their “Earn a Buck” program gives hunters access to hundreds of
acres to hunt.

*Matt Swayze, Forester for the D.E.C. will be speaking in the auditorium
about forestry services for private individuals offered through his office
and the impact the Emerald Ash Bore is having on our forests from
noon till 1PM. 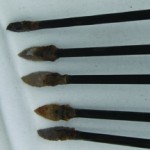