It was a small but fun group of atlatlists this year at the Candor Fall Festival! Nine year old Marlin Bassett of Warsaw, NY scored a remarkable 45 2x on Sunday in the 20 meter portion of the International Standard Accuracy Contest.

Looking over recorded scores, it looks like this is the first time any youth under 10 years of age has scored a 45 or better in this part of the competition. Marlin’s score is the fifth highest 20 meter listed score of any youth of all time; only the second time for a listed double X at the 20; and the fifth time for a listed three of more tens from the 20. All but two of the seven other high scoring youth were 15 years of age. All had remarkable scores!

Marlin’s best score at 15 meters is 46X. If his best 15 meter score and 20 meter score had occurred in the same ISAC, he would have a total of 91 3x! No one 10 or under has scored a 90 yet. There’s still a little time yet Marlin! Keep up the great effort. 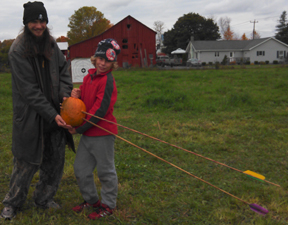