The Thunderbird Atlatl staff is back in Candor, New York in full force and ready for spring! We look forward to working with you in providing you high quality atlatl equipment. We pride ourselves on our customer service so please give us a call if you have any questions or need some assistance in deciding on what equipment will work best for you. Owner. atlatl and dart designer Bob Berg recently sat down and took a few moments to explain differences between darts produced at the Thunderbird shop.

Why the differences between atlatl darts? At Thunderbird Atlatl we make atlatl darts for lots of different purposes.

Five foot, 5 ounce ash darts may not interest someone who wants to compete in the International Standard Accuracy Contest but when it comes to summer camp or scouts with groups of 8 to 12 year old participants nothing works better. 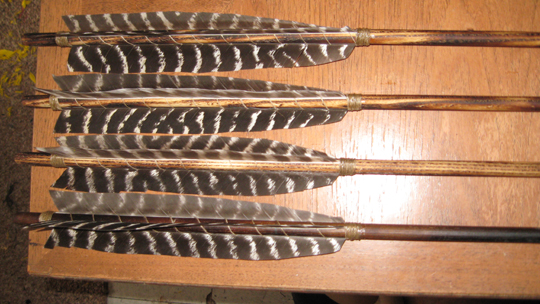 They are both durable and affordable. Our 6 foot, six ounce ash darts likewise are great for the younger set and more mature beginning atlatlists for some of the same reasons. These are the dart shafts that are included in our Thunderbird Atlatl Kits™ that we have been selling the last 16 years.

The 3 to 5 ounce bamboo darts that we make are anywhere from about 5 to 8 feet or longer with conical copper points. They are fantastic for competition because they fly straight and true. I don’t think there is a natural material better than the Yadake Bamboo we use for making these world class competition darts. Our formula for building these bamboo darts originated from adapting methods developed by Japanese arrow makers. The copper points we use originated from a study of artifacts of the Old Copper Culture of the Upper Peninsula of Michigan. While eclectic in traditional but cross culture themes, these darts really perform. Some of the highest scores on the International Accuracy Contest have been achieved with bamboo darts. 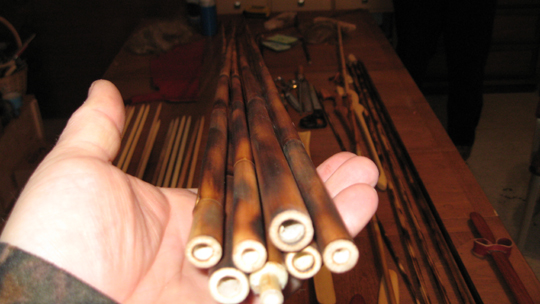 We make lighter 7 foot darts from Engelman Spruce and Douglas Fir from British Columbia for better accuracy at longer distances but they are not as good for penetration. We have been testing these darts lately to see if they indeed hold up to rigorous use on the range. So far they have done well

We make darts that are as short as 4 feet and weigh less than an ounce for distance throwing for those who want to try their hand at an interesting aspect of the atlatl sport.

It is therefore important to consider what your goals are when you purchase your Thunderbird Atlatl™ atlatls and darts.

Our 5 foot darts at 5 ounces are designed for younger beginning atlatlists.

The 6 foot 6 ounce ash darts are a good all around dart for practice and stump shooting. The 6 foot darts have been used successfully for hunting by younger or smaller atlatlists.