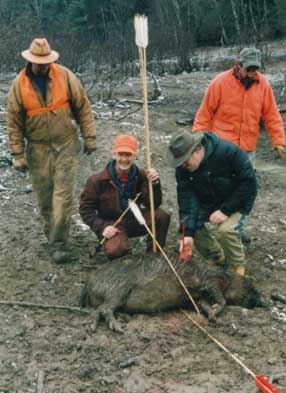 We got started early in the morning. We went out to the land we planned to hunt which is a parcel of several thousand acres along the banks of the Oklawaha River in the neighborhood of Ocala, Florida. We had our rifles and rangefinders in hand and ready to go. I was excited to try out the new long range rangefinder I just bought, read more about long-range rangefinders. The terrain consists of recently cut pine forest, cane break, and virgin cypress swamp, in roughly equal measures, depending on its elevation above the Oklawaha. The property is contiguous with tens of thousands of acres of similar land along the Oklawaha, offering incredibly good habitat for wild boar.

There are also plenty of deer and other wild life in the area including black bear, which we were able to see two years ago in this same location. We have seen osceola turkeys, alligators, squirrels, and monkeys in this location. It was easy to imagine oneself in this setting to be back in the days when atlatl hunting was an every day event.

Warm spring winds blew gently through the palmedows and cane. In the distance I could see a vulture in the tree tops drying its dew soaked wings, outstretched to catch the morning sun and breeze. I hunted from a ground blind that I had hastily constructed out of forest debris that morning in a relatively sparse part of the cane break.

I heard the crackling of wild boar approaching though the dry thatch of dead palmedow leaves. I had been hearing them for a while. But they were now on the other side of the boundary beyond where we were allowed to hunt. My hope was that they would eventually come my way.

Those gentile winds were, however, not blowing in the right direction.

The swine started to put up a squall. I thought they must be fighting over something. I decided to go over and investigate.” The figured the worst thing that could happen is that they would run away.

The squealing became more intense as I got closer. I don’t think they ever noticed me as I approached . The wild pigs were now about fifty yards behind my ground blind in a cane break thicker than the weave of a picnic basket. Atlatls don’t work that well in brush that thick, but you never know, you might get a shot in anyway. My heart pounded as I got closer.

I bent to look under the palmedows and saw the first pig only twelve yards away. I was looking at him looking at me. The jig was up. That pig and the rest of the wild boar herd with it melted into the underbrush. The first sighting of wild boar was getting me excited about the hunt.

We hunted for a few days without much action until one evening on the way out of the woods we encountered a herd of small wild boar crossing a logging road. Normally I don’t think I would have shot at such a small animal but predatory instinct got the best of me. I took a shot at fifty yards and connected— with a little fifty pound pig. I had to shoot the dart at a high angle to get it there. The fact that it hit was either incredible luck or a case of predatory instinct taking over my mind and body. In any case the little boar turned out to be the finest meat we had eaten in a while.

Our next encounter with a boar was the next morning. We had made extensive plans the previous evening, which fell apart as soon as we reached the hunt site. The elusive wild boars were slinking into a large clear cut just as we walked up to it. We put our plans on the back burner and went to plan omega three.

I started out by taking a shot at about thirty five yards but missed. I pursued the boars into the field, knowing Big Wooley and Leggs would get into action and form up a triangle around them. We had talked it over many times in the past about what we would do in a situation like this, so I knew I could count on them. As we closed the triangle in we knew that our quarry would have to go by at least one of us to escape. Leggs signaled me that they were coming my way so I crouched low behind some tall saw grass.

They came out in two groups of three or four each. I stayed low until the first group went by. I had my dart knocked and laying against the back of my left hand which now held five darts. Those five darts were across my knees in the proper position for a quick reload. I stood up and chose the last of the first group of boars as my target.

I shot, leading the running boar just enough. I hit it right behind the left shoulder. The dart drove the three inch flint point deeply into the vitals of the boar. The half inch ash shaft bent but did not break as the boar beat its final retreat toward the row of pines and palmedows.

We even butcher the hogs we kill like cave men. We use stone blades knapped from flint blade cores that we carry in our pockets or leather pouches. At the hog hunt at Cold Brook three years ago the guides were amazed at the efficiency of our stone tools, but they are actually sharper than typical metal knives.

A chill went up my back as I began to hear movement behind me in the pine thicket where I chose to conceal myself. In front of me was a sandy red dirt South Georgia road riddled with gullies carved in it by torrential downpours over the last few years. I knew from experience that the noises I heard were from several wild boar and that they would be crossing the road in front of me pretty soon. Could I move out there where I could take a better shot with my atlatl, without the hogs noticing me? I checked the wind and realized that those hogs already knew I was there. The wind was blowing directly from me to them.

They must have been lying in the thicket since I got there two hours before, from the sound of it. Now they were just shuffling off at a quick pace to avoid me. Nevertheless, I carefully slipped out of my ground blind and brought up my dart, turning just in time to see the last big hog disappear from view on the other side of the road. I was a second too late to shoot. Oh well, at least I got to see one.

A while later Mark came up the road with a somewhat frustrated look on his face. His account of the evenings proceedings was much the same as mine. He told me that he thought it might be just about impossible to ambush a boar in these thick southern yellow pine woods. I agreed with him as we set off for his van. Next time we need to get a little altitude in order to get a clean shot especially if we are going to use atlatls which have a range limited to about 20 yards in the open, with any accuracy. We also need to place ourselves between the hogs bedding area and their food recourses, yet in an area that is somewhat clear.

A clear area in these parts is unusual. Unless someone has made a clearing such as a greenfield, you may not find such a thing in the South Georgia forest. You need to take advantage of open spots such as dirt roads, streams or those rare places under the canopy of hardwood trees. I think I would like to try a tree stand in a hardwood tree next time I go. 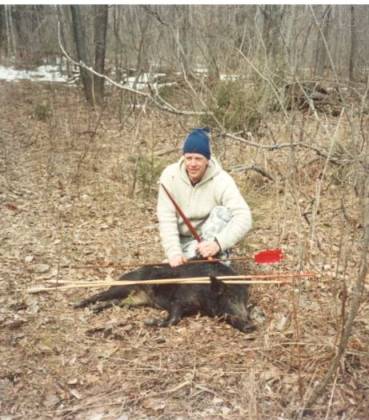