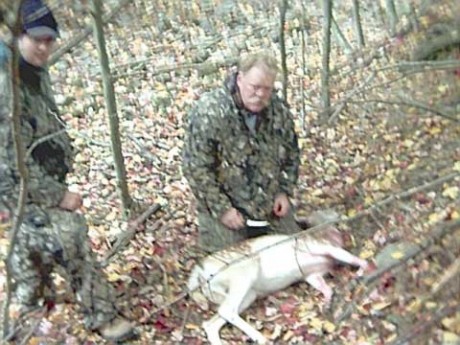 Brian Goodsell, Owner of Fallow Hollow Deer Farm was slightly amused by the nest of debris that I was accumulating for my blind. I had tried several times before to ambush a fallow deer to no avail. They tended to be a lot more aware of their surroundings than I thought at first . I finally hit upon the idea of making a blind large enough to hold me, my atlatl, and dart in the loaded position. I had discovered that any movement of the dart gave my position away. In fact if these fallow deer were to see me blink, they would be gone when my eyes were open again. The only way around this problem was to become totally invisible. I had checked the hardware store for invisible spray but they were fresh out. So it left me with no alternative other than dragging in as much forest litter as it would take to bury Brian’s tractor. I left a few look out points in my giant nest, taking advantage of natural shooting lanes. Brian asked me if I thought I was ready and I said “yea, to lay eggs”. We were using atlatls and stone pointed darts, all of which, I had made myself. I thought to myself; with this primitive gear I really would be laying an egg if don’t eventually get a deer with them. I have killed wild boar with atlatls before but they are a much slower moving creature than these fallow deer. “Lets do it ” Said Brian as he walked off in the direction he had last seen deer. His plan was to slowly drive deer in my direction, which was deep in the woods. He could easily locate deer out in the fields where they are visible from over a quarter mile away. Its been my experience that if you can see them they can surely see you. If you move in their direction they seem to melt away into the woods long before you get there, which would work nicely into our plan today. Earlier, Jim Shuler and his daughter Carrie had tried to ambush deer but they had little success, not because they didn’t see any but because when they did see them, hunter and hunted were looking into each other’s big brown eyes. Jim is a wild life management biologist and I invited him to hunt with us to get his opinion on this kind of hunting. This is the first time this kind of hunting has become readily available, thanks to the Goodsells who have looked at Atlatl hunting as one more way to market their product, the fallow deer which they raise on their farm. One fear I had at first was that hunting in an enclosed area would be too easy, but the hunting area is so large and the deer so skittish that that fear proved to be without substance, especially since we plan to hunt mainly with atlatls. Jim had secreted himself a few hundred feet away from me on one side and Carrie hid in some thick pines on the other side about the same distance away. I heard deer coming but when I strained to see them they were scampering along the edge of the woods about two hundred feet away. I hoped that Jim would get a shot. Meanwhile, Carrie stood quietly While a couple of does crept up the creek between us. Three came within about 15 yards from me and started drinking from the creek. The deer closest to me was obscured by some brush so I chose to shoot at the one in the middle, besides she was the largest of the three. There was a branch between me and the doe but with an atlatl you can arch over obstructions. I drew an imaginary line in the air with my eyes just as the deer presented a nice quartering away shot. I let the dart fly with just the right amount of force to clear the top of the branch. As the dart reached its apex, the doe turned toward me. She had completely flipped around when the dart struck. The seven foot ash shaft sank deeply into her flesh and protruded out the other side. She dashed by me with the dart obviously transfixing her vitals. As she went past a large oak she suddenly turned into it to break the dart off as she past it by. The 9/16 th inch hardwood shaft snapped like a toothpick as she bounded toward where Carrie stood. I listened intently as the deer crashed through the underbrush. Then silence. I knew it was all over but not exactly where. I stayed where I was until Brian came walking slowly toward me. I gave him the thumbs up signal. We followed the blood trail to the oak tree, then off into the pines, and across the creek collecting Carrie as we went. Somewhere along the way Jim also appeared and we fanned out in the direction of the blood trail. It was only moments later and Brian yelled “Here she is.” I was glad to prove to myself that I could harvest a fallow deer with “sticks and stones, and horns and bones” I guess I knew it all along but I didn’t realize how really challenging it would be. You see, this was the fifth time I tried to accomplish this task, with no success until now. Both Jim and Carrie said that they enjoyed the hunt. I think we all agreed that it was a little trickier than anticipated. What we liked best was the fast action of the hunt, with plenty of chances to see deer. The challenge was to stay absolutely still until you got your shot. Jim did indeed get a few shots but he unfortunately missed. Jim’s hunting skills far exceed mine but I had more luck with the atlatl that day.